IPL 2021 Schedule: The 14th season of the most exciting domestic cricket league, IPL 2021 will start from 9th April 2021. Although scheduled to end on 30th MAY; IPL T20 had to be postponed due to reckless cases of COVID-19. The schedule had been arranged and it will again resume from September 19th, 2021. The final match will be played on 15th October 2021. IPL 2021 schedule was released a few days back by the BCCI. The tournament kicks off in Chennai where Rohit Sharma led Mumbai to face Virat Kohli-led Royal Challengers Bangalore. Last year’s finalists, Delhi Capitals square off against MS Dhoni’s Chennai Super Kings on 10th April according to the IPL schedule 2021. 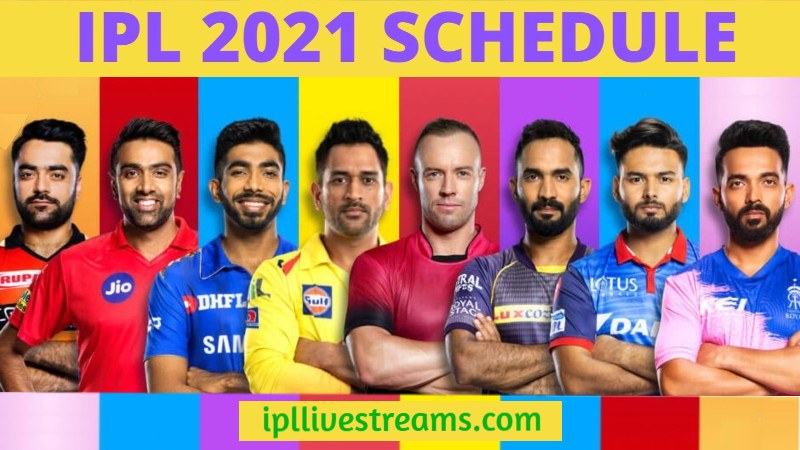 The IPL governing council had a meeting on 6th March to decide if they can organize the tournament in India. Additionally, they had discussed the IPL schedule 2021, match venues, probable starting date, COVID-19 protocols, Bio Bubbles, etc.

The ongoing series between India and England concludes on 31st March 2021. So, the Indian players will have a one-week break before the cricket carnival begins. Here is the IPL fixture 2021:

Previously, when the name of these six cities was discussed as hosts of IPL 2021, Punjab and Hyderabad owners were vocal about their discontent with BCCI’s decision. But after prolonged discussion, the afore-mentioned cities have now been made official venues of this edition of the Indian Premier League.

After analyzing the IPL 2021 schedule, we can observe the introduction of a new format. Not a single franchise will play in their home ground. Each team will play their matches in different venues throughout the IPL 2021. As a result, the team will fail to gain any home advantage being not able to play IPL live in home conditions. Perhaps this could be a relief for the Punjab and Hyderabad franchisee who was not happy as their stadiums were not considered as venues for holding IPL 2021.

The knockout IPL 2021 schedule is also released. All the knock-out games will be played in Narendra Modi Stadium in Ahmedabad.

Between which Teams IPL Match is Today?

Everyone wants to know, especially the kids that today’s IPL match is going to occur between which teams. As per the IPL 2021 match schedule, every team will face each other two times and get the chance to take revenge on the opponent team.

The IPL 2021 first match is going to be held between the defending champion and 5-time IPL champion Mumbai Indians and 3-time IPL trophy runners-up and the runners-up of IPL 2016 Royal Challengers Bangalore.

What is the Timing of Today’s IPL Match?

As per the recent updates or according to the latest news regarding the IPL 2021 match schedule the timing has been declared, this year ipl matches will be started from 7.30 pm IST. BCCI has announced that IPL will start from 9th April 2021 and it will be finished on 15th October 2021 according to the new IPL 2021 schedule.

In India, the starting timings of IPL matches are usually 7.30 pm.

What is the Venue of Today’s IPL Match?

BCCI had declared the entire 2021 IPL match schedule in the mid of April & the full month of May 2021 according to the old schedule. But due to the COVID-19 pandemic, the previous ipl 2021 schedule matches are shifted to the new date. Now the rest unplayed ipl matches will be played from 19th September 2021 and it will be finished on 15th October 2021. BCCI has recently announced the new dates for the remaining unplayed IPL 2021 matches.

The different cities of UAE are selected for the latest IPL 2021 Venues or today’s IPL Matches.

BCCI ( Board of Council for Cricket in India) has declared to begin the Indian Premier League from 9th April 2021 in the multiple cities of India. The ipl cricket match will continue for 60 days long. Therefore, all the IPL 2021 venues are scheduled for different Indian cricket grounds. All the IPL 2021 matches are scheduled to be held in India only, but now they will be played in different cities of UAE. Dubai, Sarjahah, Abu Dhabi are the IPL venues that will conduct all the remaining matches of IPL 2021 live streaming matches.

BCCI has decided to organize the IPL 2021 Final venue in Dubai, and the Qualifier 1, Eliminator, Qualifier 2 in Sharjah, UAE. The date of the Final IPL match 2021 is set on 15th October 2021.